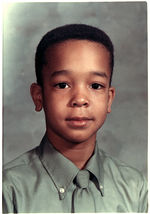 Tyrone hails from Cleveland, Ohio. What? That’s not enough? Okay, his favorite color is blue, he’s not fond of green olives and he doesn’t understand maraschino cherries. He loves Earth, Wind and Fire and he will make you love them too. Tyrone likes to write all kinds of stuff. TV stuff. Movie stuff. Short story stuff. Shopping list stuff. For more info on the stuff Tyrone likes to write, just catch him on the street and ask him. He’s the guy wearing the yellow Walkman on his belt and singing “On Your Face” at the top of his lungs. (Yeah, he’s off-key, but at least he’s loud.)