A Guide to the Prehistoric Beasts and Cryptos in Carthago: Origins 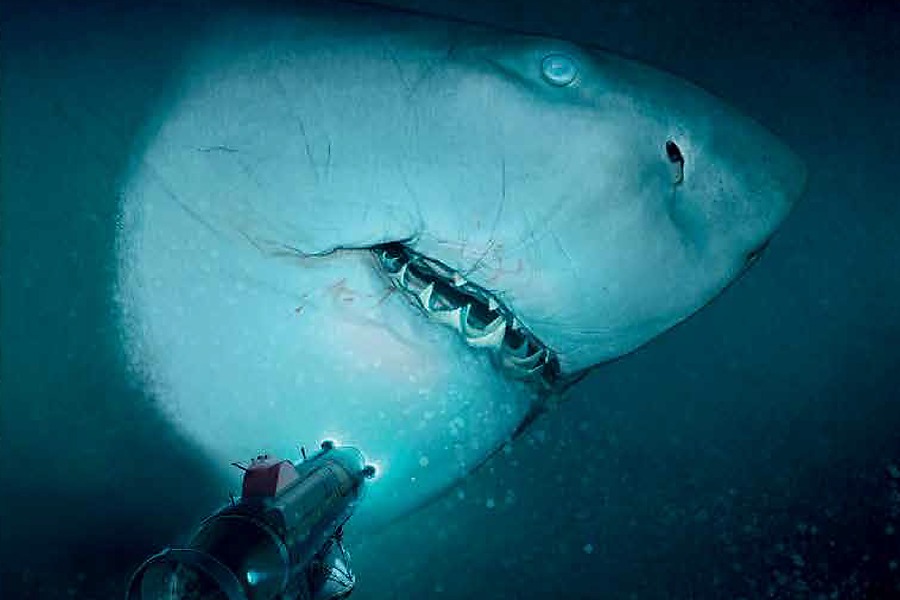 First released in the United States in 2016, Carthago unspooled a mystery that only widened with each page turn. The ensemble revolves around a corporation composed of scientists and unashamed adrenaline addicts hellbent on discovering the secrets lying kilometers under the waves. Secretive company head Wolfgang Feiersinger operates a web of excursions that span decades and continents, while manipulating those around him in ways that defy invasive. The debut volume—consisting of the first six books in the series—stars oceanographer Kim Melville and her team as they break through a series of underwater grottos. That hubris unleashes a terrifying discovery—the Megalodon, a prehistoric shark that's also an ancestor of the Great White. But writer Christophe Bec and artists Eric Henninot and Milan Jovanovic don't stop their excavations with ravenous sea fauna. They slowly present a bestiary of wonders as terrifying as they are majestic. The final page of Carthago ends on an especially electrifying cliffhanger: a lone panel of an aquatic, bipedal creature gliding through the water.

Here's a look at the terrifying phenomena that populate this unique world. 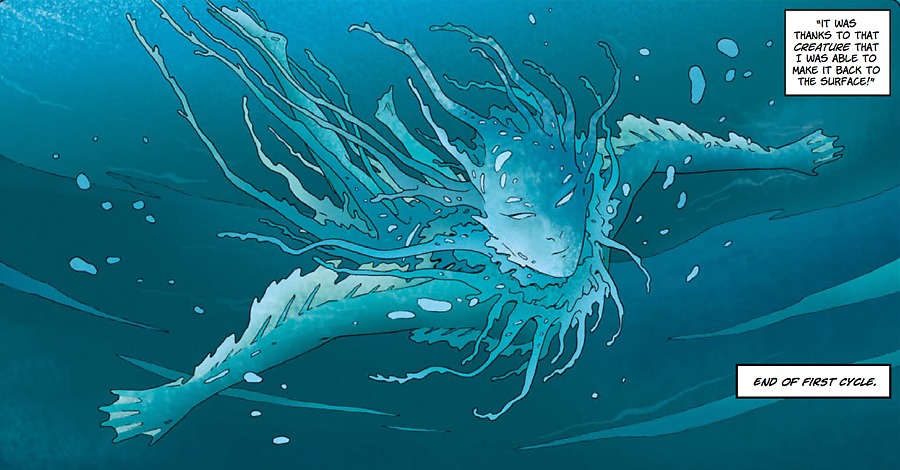 Carthago: Origins—out this week from Bec and new artist Ennio Bufi—not only dives deeper into the events of the first volume, but pivots backwards and forward in time to decipher the existence of these surreal beings. Bec wastes no time revealing a race of human amphibians who have historically mingled with the human race, starting in 3,500 BC with the construction of the pyramids. Those ancient structures appear more than in the desert within Carthago: Origins.

Kim's daughter, Lou, is now a young adult following in her mother's footsteps, even if tension between the two remains high. Lou navigates five underwater cities populated with pyramids and traps—and an elusive sixth sanctuary waiting to be explored 4,600 meters below. She reveals an even more intimate connection to the underwater humanoids as she flexes a series of gills lining her ribcage. This volume slowly pans out to reveal a sweeping picture of these elusive beings and how their presence—and the actions  of Feiersinger—propel Lou and those around her to the bottom of the sea. 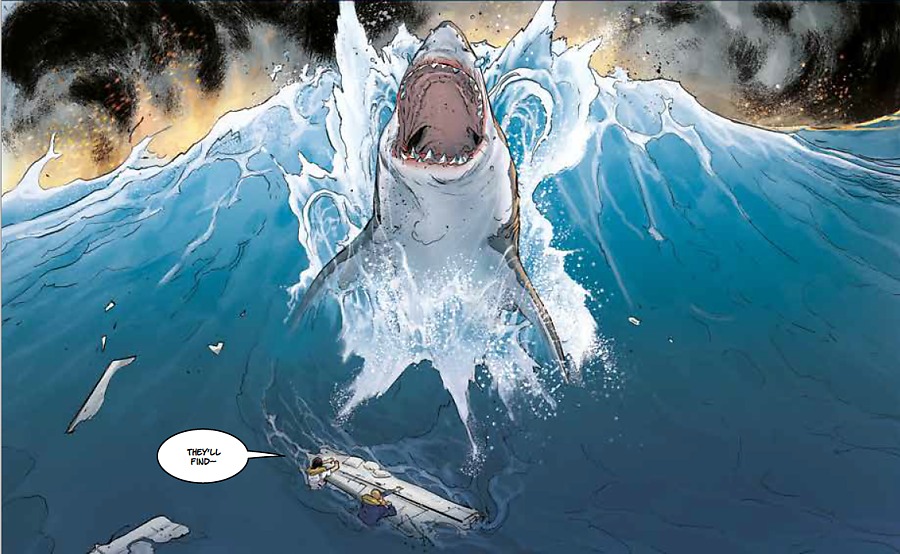 Stretching 15-meters long and weighing 45 tons, the aforementioned "Big Tooth" sharks storm this volume in numbers, swimming in schools as they devastate bypassing whales and unfortunate boaters. But as Lou discovers in the opening chapter, the "Megs" aren't mindless, sadistic predators, but disruptive forces of nature forced into an unprepared food chain. Lou and her crew attempt to fasten beacons onto an albino "Meg" from the Mariana Trench—its eyes unused from spending its life in the sunless depths. Lou calms the hulking sea creature even after it nervously chomps on a peer's arm, showing a connection beyond empathy.

As Lou and her crew venture into the submerged cities, the Megalodons' presence only becomes more frequent, and their connection to the amphibious humans pushes Lou onward. Unfortunately, most creatures, boats, and underwater girders find themselves at the brutal mercy of these primal fish. 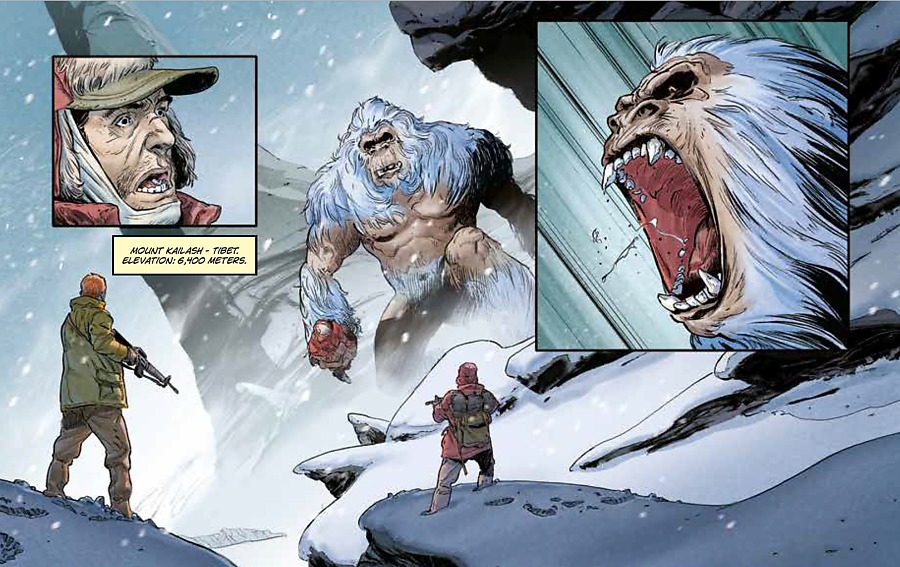 Introduced in the first volume of Carthago, the Tibetan Yeti begins its journey on Mount Kailash and ends stuffed in Wolfgang Feiersinger's massive Romanian castle, 17 rounds lodged in its ape-like body. Impressive taxidermy aside, this abominable snowman plays an integral role in Feiersinger's arc, explaining not only his physical state, but also his bittersweet relationship with his brother, Harry, and right-hand man Donovan. Without revealing too much, the fallout of the grisly confrontation above involves an improvised stretcher made of human bones and grudges designed to last centuries. For a deeper look into this chapter, Carthago Adventures expands upon Feiersinger and Donovan's expeditions in Tibet and beyond. 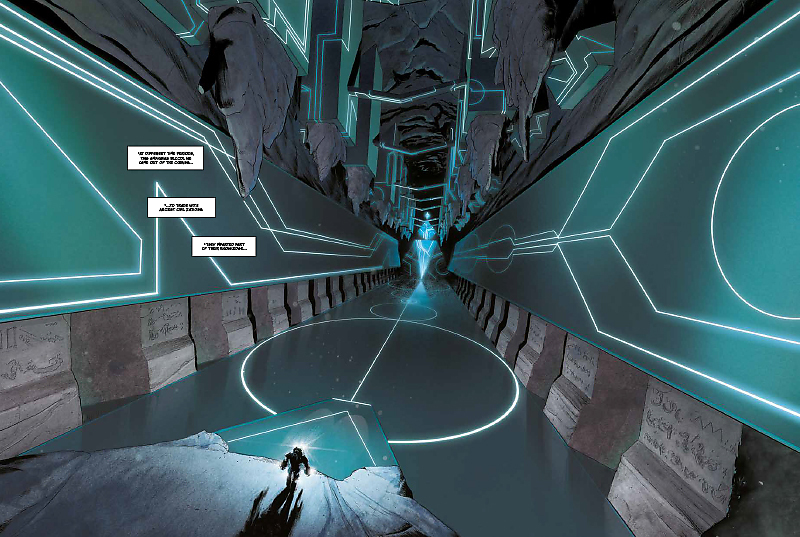 What!? You thought we'd spoil all of the enigmas and twists of this intricate masterwork? We wouldn't dare deprive you of that pleasure. Carthago and Carthago: Origins are available in print and digitally (check out comicshoplocator.com to find the comics store nearest to you) and are the perfect deep reads if you're looking to lose yourself in some spectacular, vast fiction. Let us know what you think on our Twitter account.