This Friday marks the day that Jean Henri Gaston Giraud—better known under his nom de plume Mœbius—would have turned 82. He leaves behind a storied legacy of transcendental sequential art; Hollywood took notice and recruited him to both write and visualize some of the most outstanding cinematic hallmarks in science fiction and fantasy. Mœbius' career ignited in the mid-60s during his tenure as artist on the austere Western Blueberry with writer Jean-Michel Charlier, but he ascended to a new plane of mastership with the launch of Metal Hurlant, the pioneering sci-fi/fantasy/horror magazine he cofounded after starting Les Humanoïdes Associés (Humanoids in the United States) a month before. The publication would introduce Richard Corben, Berni Wrighton, Enik Bilal, Vaughn Bodē, and countless other avant-garde cartoonists on an international stage. The magazine also offered Mœbius an outlet to introduce his most treasured works: Arzach, The Airtight Garage, and—considered one of the finest comics in the history of the medium—The Incal with writer Alejandro Jodorowsky.

In celebration of the man who spawned myths in brushstrokes, we're presenting every cover Mœbius illustrated for Metal Hurlant. Humanoids' very own Senior Art Director and writer Jerry Frissen (The Metabarons: Second Cycle, The Zombies That Ate the World, The Fire of Theseus) is a treasury of information on Humanoids' history, and has provided commentary on the 13 following pieces that redefined what science fiction could be. 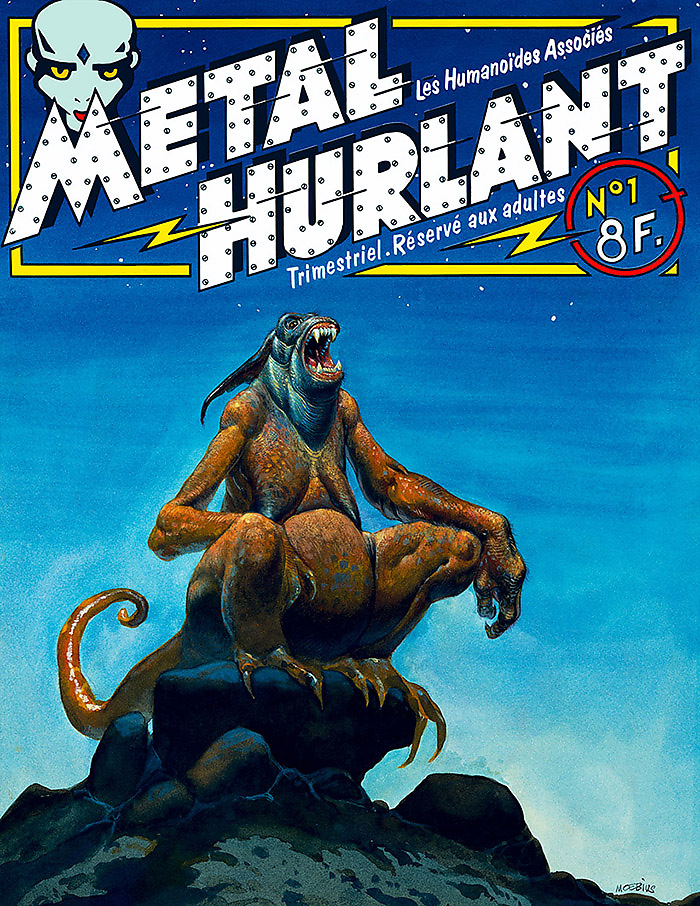 The first Metal Hurlant I got was #13—when I was 13. Since it was forbidden to minors, I stole it. Finding the first 12 was pretty hard. When I finally found the first one, I was so happy that I kept it with me constantly. It was in my backpack, at school, for months. 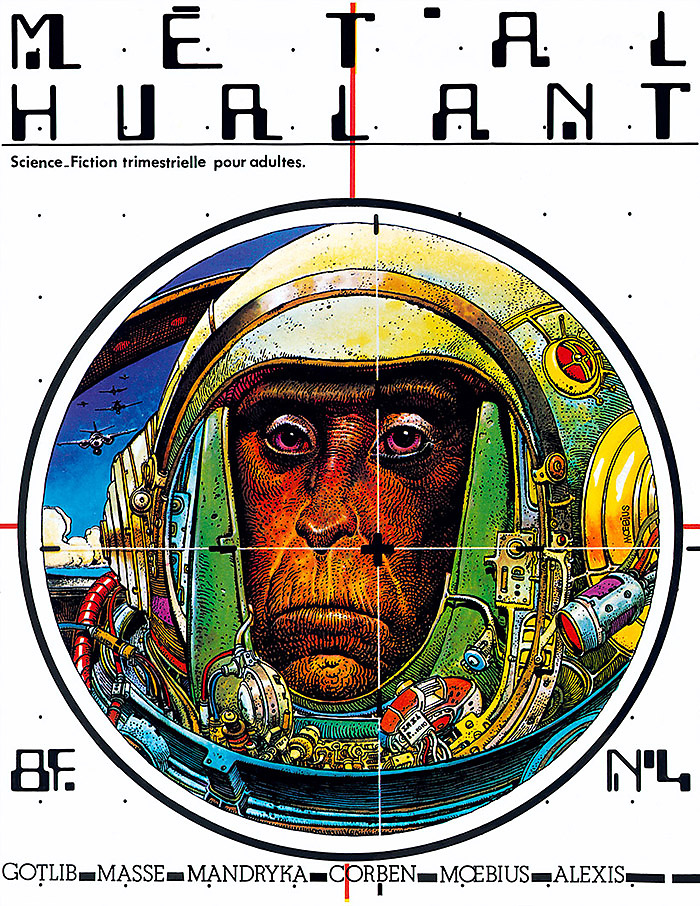 I’ve always been fascinated with this image. I never understood what was going on, but I didn’t really care. I’m not sure who did the design around it—probably Etienne Robial who designed the early look of Humanoids. 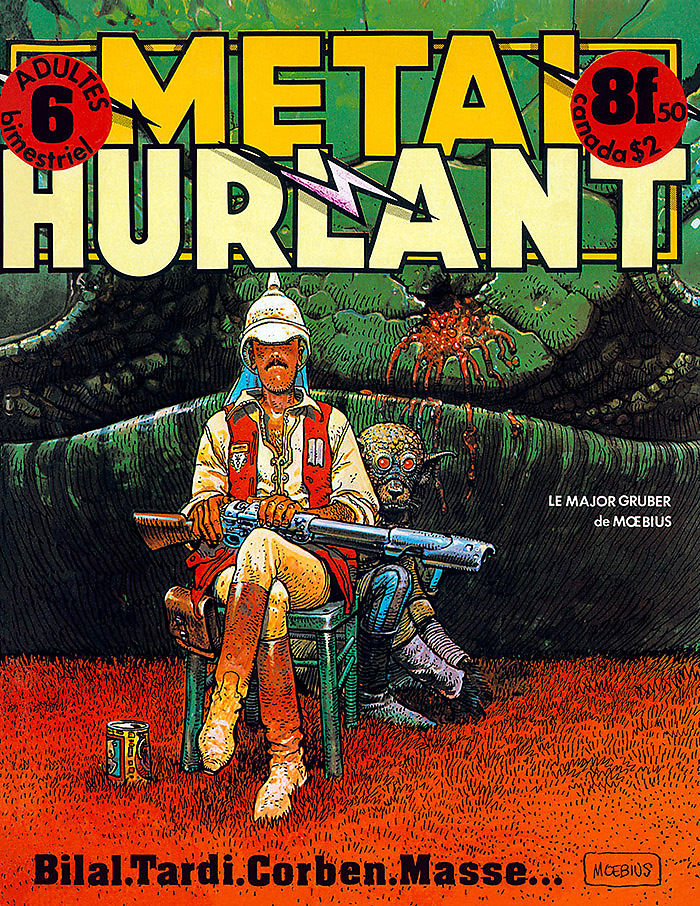 Metal Hurlant #6
Personally, I think this is one of the most fascinating illustrations Mœbius has ever done. It shows every part of what he was: an amazing artist with limitless imagination and a great sense of humor. When I realized that there was a black-and-white story from Mœbius inside this issue, I began searching for another copy, and as soon as I found it, I colored it. It was freaking ugly, but still, I should have kept it. 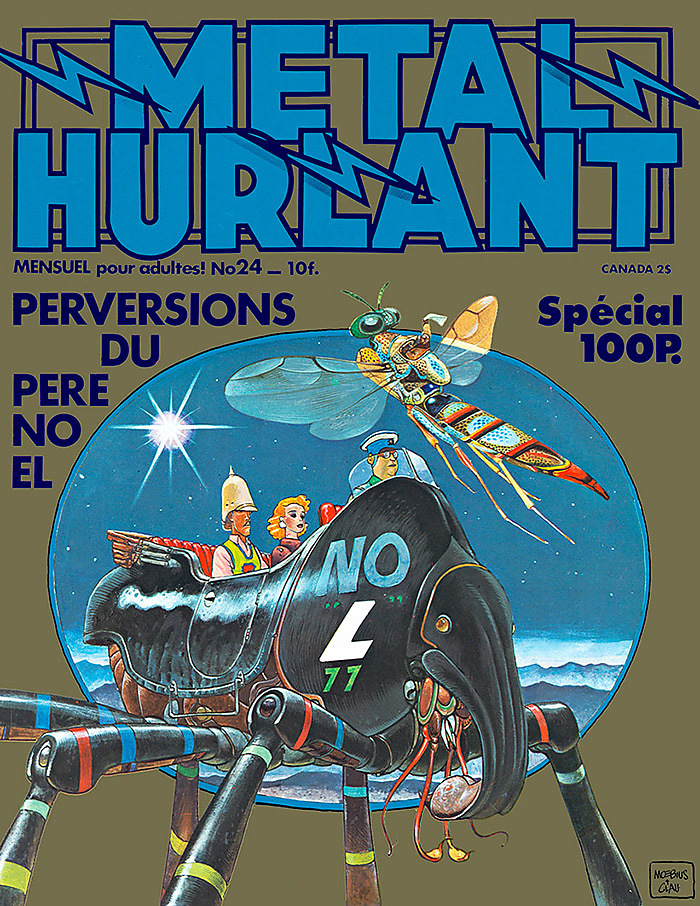 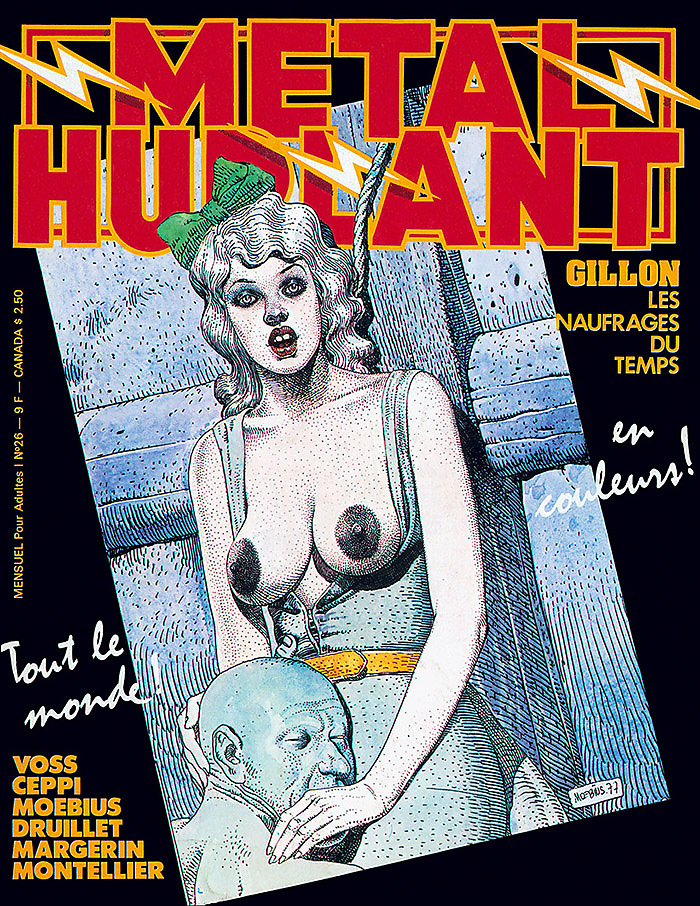 With this cover, we can salute the incredible balls that the people at Humanoids were showing. On one side, they were fighting for the magazine to be sold to minors, but they were also fighting for their freedom of expression. They were about to win. This issue is also the reason why my parents hated to see me reading Metal Hurlant.

This was a surprise for everybody: Blueberry was suddenly in Metal Hurlant. It was only one book, Nez Cassé, and lasted for three or four issues. Blueberry was wildly popular back then.

A few issues later, to replace Blueberry, Mœbius and Jean-Michel Charlier did another western, Jim Cutlass. They only made one book. It was taken over by another artist years later.

This is a special one. It’s the only piece of art made by Mœbius and Philippe Druillet. It was colored for this issue of Metal Hurlant, which was a best-of encompassing the early years. 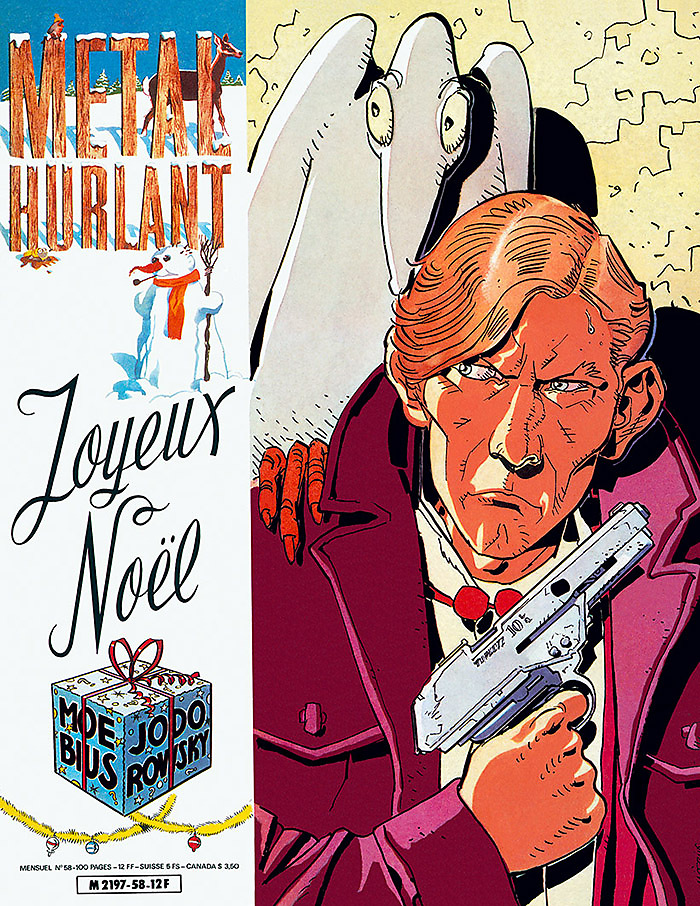 “Merry Christmas,” stated the cover. Indeed, it was! This was the beginning of what was to become the most recognizable of Mœbius’ work: The Incal. I remember how excited I was when I got that issue. 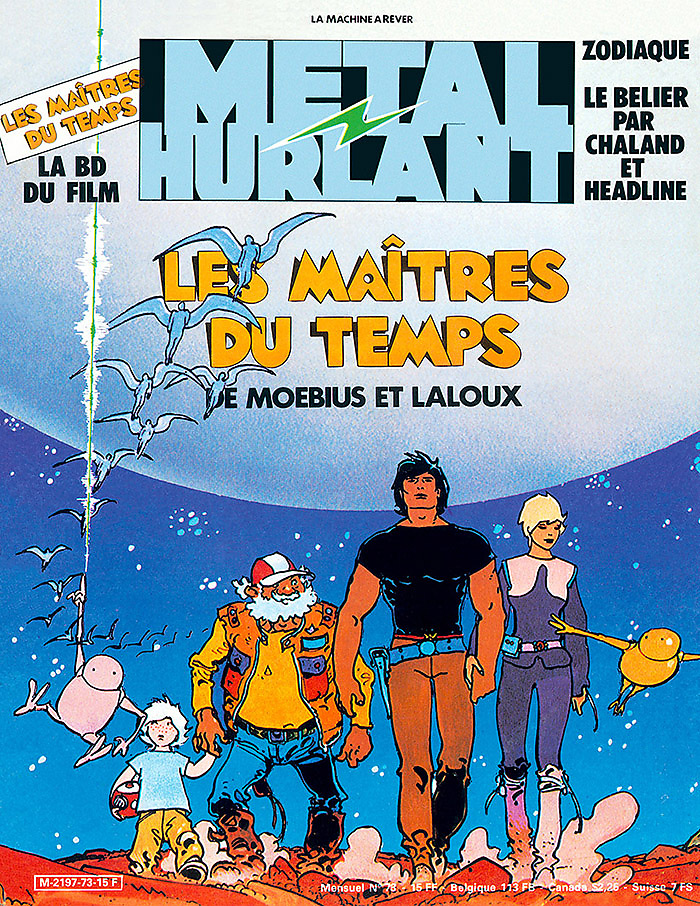 This cover is actually the movie poster of Les Maîtres Du Temps, the movie that René Laloux did and Mœbius’ wrote/designed, based on the novel The Orphan of Perdide by Stefan Wul. 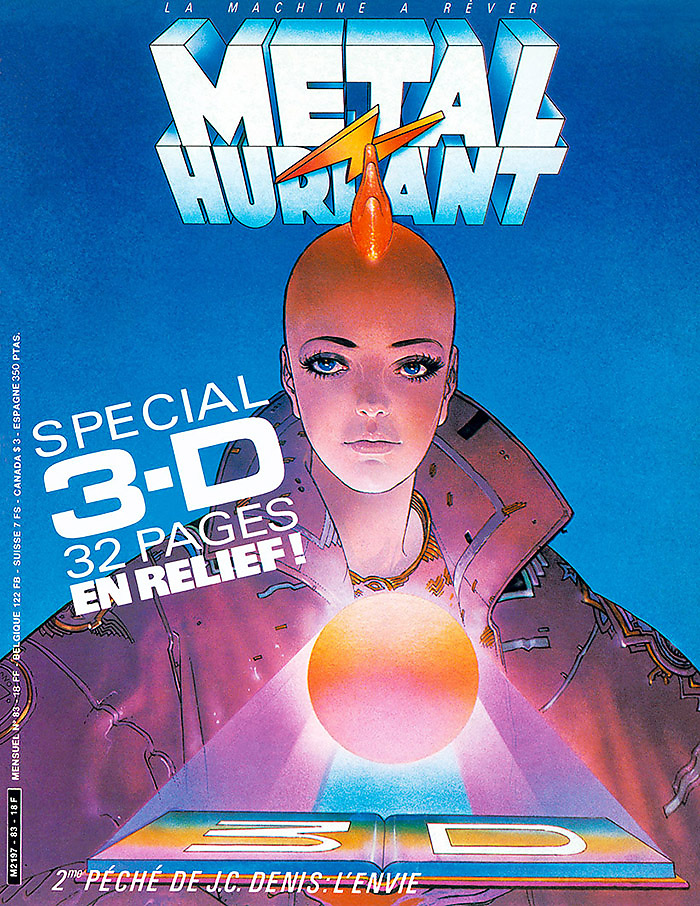 Part of this issue was in 3D, printed in green and red and sold with a pair of glasses. 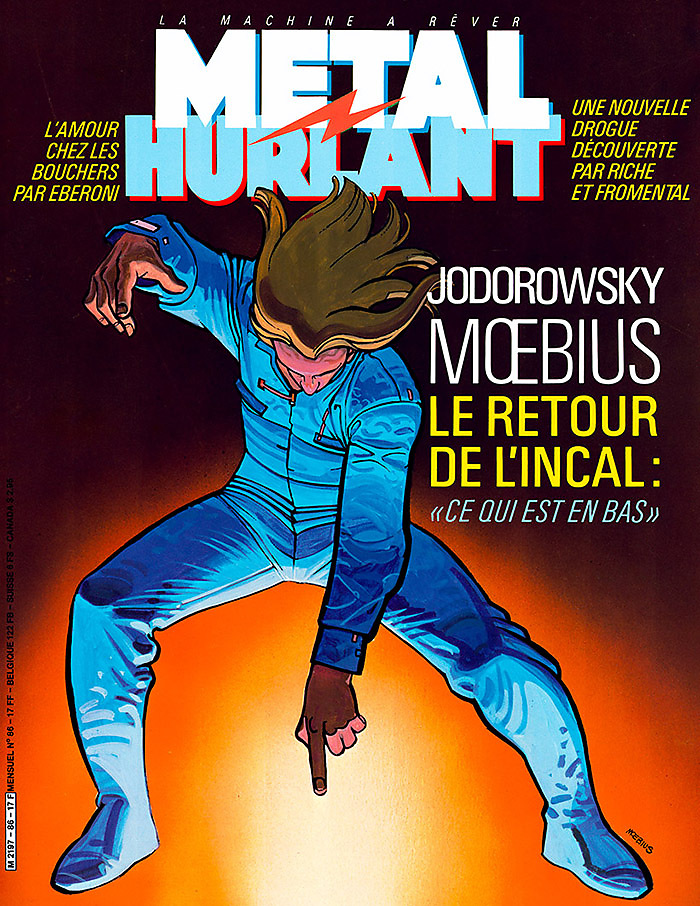 This issue was the beginning of Book Three of The Incal. It was around that time that Mœbius announced that after the end of The Incal, he would stop doing comics. Obviously and fortunately, it wasn’t true. This cover was only used in The Incal printing from 2003. 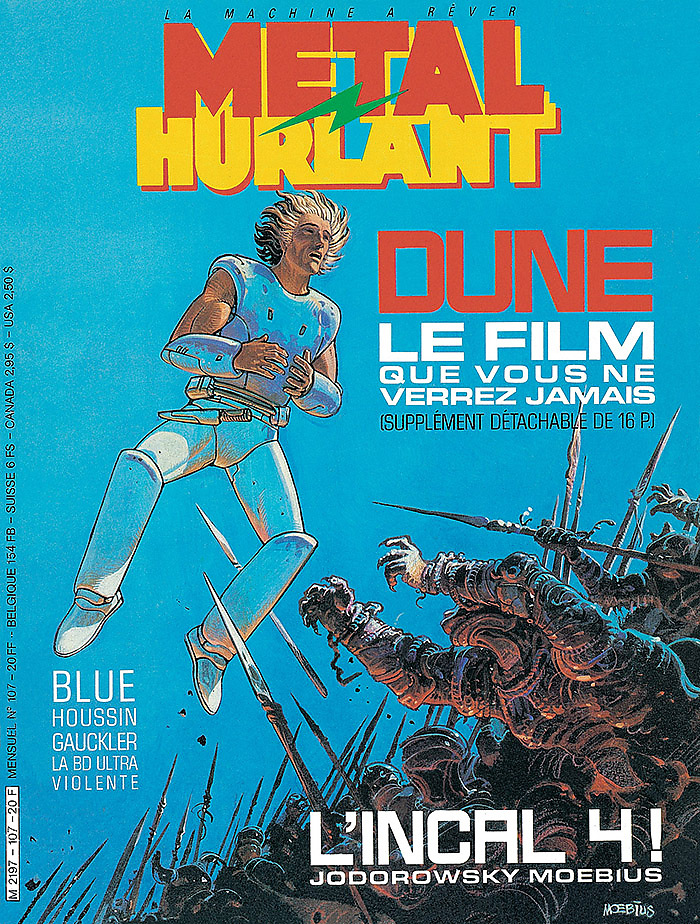 This is the last cover Mœbius did for Metal Hurlant. It is also the cover for The Incal: Book Four.