Lugosi
The Rise and Fall of Hollywood’s Dracula - Softcover Trade 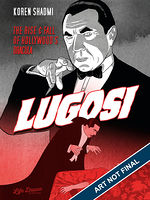 Lugosi
The Rise and Fall of Hollywood’s Dracula - Softcover Trade

The story begins near the end of Lugosi’s life, as he checks himself into rehab after years of drug addiction. As he withdraws, he hallucinates, and visions of his life unfold.
Lugosi's career as a young theatre actor in Hungary, his service in WWI (including his fateful war injury), his political activism which lead to his exile from Hungary, and his first marriage all unfold. Following his divorce, Bela Lugosi immigrates to the United States where he lives in obscurity until his role as Dracula in a stage play puts him into the limelight. He successfully lobbies for the lead in the film and his career takes off. His rivalry with Boris Karloff, excessive spending, and drug dependence are detailed along with the decline of his career and his next several marriages.